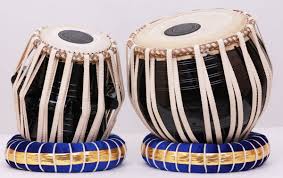 The tabla is a South Asian membranophone percussion instrument, containing a few drums, used as a piece of traditional, built up, well known and society music.The Tabla is seen as the leader of drums
and percussion instruments and is the most conspicuous Indian rhythm instrument.
It includes two drums, the Bayan (colossal bass drum) and the Dayan.The two of them are regularly played together. Both the two drums as a couple and besides the Dayan in solitude – rather than the Bayan – are called Tabla.